He won Saturday’s eight lap race from pole, made a stunning push through to win the second partial reverse grid race on Sunday morning, and then sprinted off pole to an untroubled win in the third race on Sunday afternoon.

This is his third championship, and it is the third time he has won the Pukekohe round.

“It’s been a perfect weekend and a perfect start to the championship, but the speed of the guys behind me has come up a lot over these three races so I know it’s not going to as easy at round two,” he said.

In race two, Quin was again second, the experience of the pair showing through at a circuit they both agree is a difficult one to master due to its bumpy character and the high speeds possible. The partial reverse grid draw had put Blewett on the second row, but he made short work of the opposition, carving through to a comfortable lead he would manage for the rest of the race.

The third race saw Blewett get a clean start and then put a gap on the field as the battle for the podium placings developed behind him, with Michael Scott in charge of second place for much of the race but coming under increasing pressure from Callum Quin who had struggled with cold tyres early in the race.

“The car was slow for starters, we were losing about a tenth a lap for a while there but then after about five laps the tyres came in and I was hauling John in. With a lap to go I checked my mirrors and though it was worth having a go at getting past,” Quin said.

His bold move paid dividends, delivering second place to lock up the top two places for the round in favour of the pair of experienced TR 86 racers. For Scott, the third podium placeshowed his potential when able to race without the braking issues that hampered his run in the first two races. 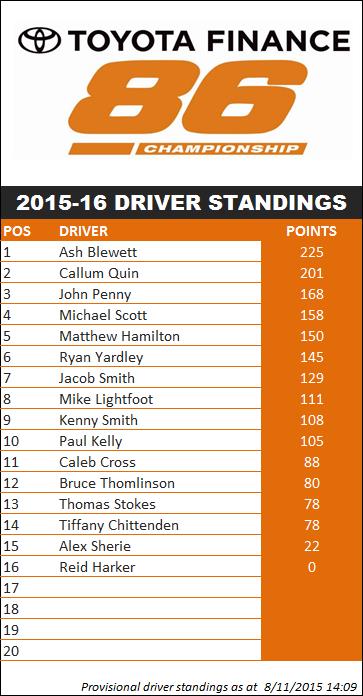