Two from two for Audis, but Kiwi drivers star at Spa

Three New Zealand drivers on the podium at the Six Hours of Spa endurance race at the weekend in a sensational sweep of class wins.

The factory Audi team won the Six Hours of Spa endurance race at the weekend, giving them two wins from two rounds of the 2015 FIA World Endurance Championship.

The team opted to run its cars in low-downforce ‘Le Mans’ aero trim, which did not give them greater track speed but enabled the cars to double-stint their tyres, saving precious pit time over rivals Porsche and Toyota. Hartley had also put the LMP1 Porsche he shared with Timo Bernhard and Mark Webber on pole as part of a dominant 1-2-3 qualifying performance from Porsche. He then set fastest lap just two minutes before the end of the race.

Earl Bamber, Whanganui, had been fastest in tricky conditions during free practice but finished three laps down after his team-mate Nick Tandy tangled with an LMGTE car and damaged the Porsche’s front bodywork, forcing a lengthy stop for repairs.

Defending champions Toyota had a miserable race, their number 2 car finishing in fifth and the 2014 champion driver line-up dropping out of contention with a sticking throttle. 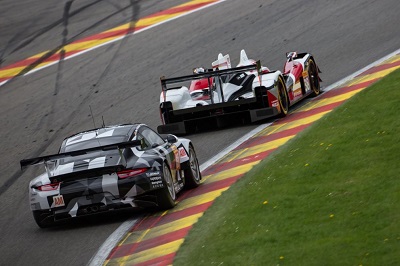 Jota Racing despite an early-race drive-through for a jump-start by Tincknell. Late race retirement for the pursuing Ligier-Nissan of Sam Bird, Julien Canal and Roman Rusinov left Evans a clear run to a one-lap victory.

The battle in LMGTE PRO was tense throughout the whole six hours, with the leading cars never more than 20 seconds apart.

Category winner Stanaway said the Aston Martin team was pursued by the factory Ferraris but the team had closely analysed their performance at the opening round to maximise their competitiveness.

“We played our strategy by ear. We had looked very closely at our race at Silverstone and understood where we lost time. Our pit stops were perfect. Ferrari made a mistake and that was all we needed to win this race.”

All four of the Kiwi drivers are graduates of New Zealand’s Toyota Racing Series. Hartley was the first driver to win a race in the series, Evans has won the championship and is a multiple New Zealand Grand Prix winner, Bamber and Stanaway are both TRS race winners.