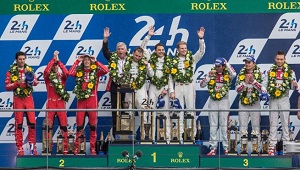 "It's beyond my wildest dreams to come here and win Le Mans at the first attempt,” said Bamber after the race.

Wanganui-born Bamber is on the rise, with multiple Porsche Carrera Cup and Super Cup titles to his credit.

“It's been an amazing 12 months for me. A year ago I was driving for Timo [Bernhard, second-place finisher]'s Carrera Cup team in Germany. I have to say a huge thank you to Porsche for believing in me and giving me the opportunity to race here.”

The win comes as part of New Zealand’s strongest Le Mans performance this century, with Mitch Evans taking a top ten finish and placing second in the LMP2 class. Tauranga’s Richie Stanaway led the GT class for Aston Martin but dropped to 41st after his co-driver Fernando Rees collided with an LMP2 car.

All four Kiwi drivers are graduates of New Zealand’s unique and innovative Toyota Racing Series, a series instigated by Toyota New Zealand to provide an opportunity for young drivers to compete in a highly competitive environment designed to hone and prepare them with the racing skills necessary to step onto the world stage.

New Zealand drivers won at Le Mans in 1966, when Chris Amon and Bruce McLaren crossed the line ahead of another Kiwi, Denny Hulme, and his American team-mate Ken Miles.

Bamber, racing in a team that also featured German Formula One driver Nico Hulkenberg and British driver Nick Tandy, started third on the grid. The trio took the lead after eight hours of racing and were dominant through the rest of the race.

Brendon Hartley, former F1 driver Mark Webber and German driver Timo Bernhard had started from second on the grid and led the race up to hour nine before losing the lead to the winning trio.