As the clock counts down towards the 2022 Castrol Toyota Racing Series and its 18th season, some number crunching at TOYOTA GAZOO Racing New Zealand of the previous 17 championships has revealed some outstanding high achievers – none more so than Daniel Gaunt.

Gaunt, of course, has some very recent ‘history’ in the category having led a large chunk of the New Zealand Grand Prix earlier this year before being passed by the unstoppable Shane van Gisbergen.

He’s also been a regular test driver for the FT60 in the last year or two and of course partnered Tayler Bryant to success in the Toyota 86 endurance series at the end of 2020 with a couple of very impressive drives that showed he had lost none of his pace or prowess.

What the statistics revealed, however, is that across all of the numbers combined he is the most successful Castrol Toyota Racing Series driver there has been in the history of the category – a fact he achieved not just with speed, but also with remarkable consistency.

The ‘purest’ measure of course, is on wins and Daniel tops the table with 20 wins, three ahead of Earl Bamber and Andy Knight. His consistency is apparent when second and third place finishes are also added up. Daniel has the second highest tally of seconds and the highest tally of thirds. In total Gaunt has made an incredible 47 appearances on the TRS podium – so far……

Despite being outside of the top five in terms of TRS races entered, he also is the second highest all-time points scorer, just 22 behind Knight’s 4259 all-time haul. Both Knight and Gaunt are also comfortably ahead of the third placed scorer in the stats, Ben Harford who’s a good margin ahead of Earl Bamber and the Leitch brothers Damon and Brendon.

Showing he’s a speed merchant as well as a racer, Gaunt also sits second in the all-time list of pole position holders, though the comfortable leader there is Mitch Evans on 20.

“It’s incredible to look back at these stats,” said Gaunt. “You don’t realise that what you’re doing at the time is going to stand the test of time. There have been some incredibly talented drivers come through TRS.  My advice to young guys would be to stop, take the time and enjoy the achievement and moments along the way….”

Also evident in the statistics was just how international the championship has been over the years.

The championship is fast approaching 20 drivers who have gone on to test or race at the pinnacle of the sport – F1 -and that statistic will of course come soon enough, but drivers from no fewer than 39 countries have graced the tracks of New Zealand with their skills.  New Zealand, Australia and Great Britain sit in the top three positions in those stats to date. 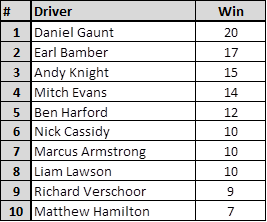 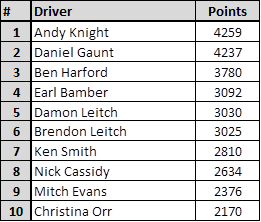 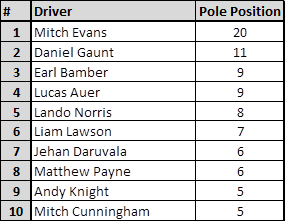 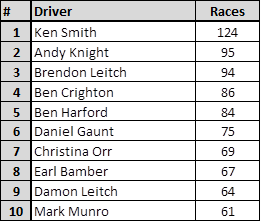