Toyota Racing Series and the Toyota Finance 86 Championship will be part of a revival of New Zealand motor racing with an agreement to unite the country’s top racing categories under one Premier Racing Calendar.

MotorSport New Zealand together with a newly-formed Series Organising Group consisting of the major North Island racing categories and the Historic Racing Club agreed a calendar that will include a combined V8 grid for NZV8, TLX and V8 SuperTourer schedule cars to be known as New Zealand Touring Cars, the spectacular Toyota Race Series and the New Zealand Grand Prix. The Ssangyong Summer Series will also run within the Premier Racing Calendar.

A new group made up of the class coordinators was formed – the S.O.G. (Series Organising Group) – to work with MSNZ and deliver stability and top level motorsport  to rekindle both public and corporate interest.

Nine top level circuit racing events will be on offer to Kiwi race fans, made up of eight race meetings in the Premier Racing Calendar and the Australian V8 Supercar round at Pukekohe.

The Historic Racing Club will organise and promote all events, with the aim of giving each event the same ‘iconic’ status currently enjoyed by events like the NZ Grand Prix, the New Zealand Festival of Motor Racing and the V8 Festival.  The HRC will continue to run its other events, with an expanded club motorsport calendar in addition to the premier calendar and its regular historic motorsport programme.

“This was an historic day for the sport with everyone together in a room working to build a better future for circuit motor racing in New Zealand. There was a great deal of goodwill and a lot of hard work had already been put in to bring the calendar together even before the meeting. We have some great categories racing at some great circuits and the job now is to turn them into the best events we can. There is some fine tuning to do and plenty more work, but we can now all move ahead together in the best interests of the sport. Exciting times definitely lie ahead,” Mr Johnston said:

“MSNZ supports the formation of the Series Organisers Group and looks forward to working with that group and being part of what signals the start of a bright future for premier motorsport in New Zealand.”

“The announcement of a comprehensive summer calendar that includes the regular dates for Toyota Racing Series enables team management and drivers to plan their summer campaigns in a timely way. We are pleased to see that the interests of New Zealand’s many motor racing fans have been put foremost with all events having quality categories present. TRS is a Gold Star championship and will once more challenge our best local racers and rising international drivers with a five week racing season that culminates in the 61st New Zealand Grand Prix at Manfeild. We see the Grand Prix as the flagship event of the championship season and we are pleased to see the commitment from other leading categories to this event and to the summer of motorsport.

“The confirmation of the calendar is great news for the Toyota Finance 86 Championship. In the ‘off season’ we have been working hard to maximise driver and team commitments for 2015-2016 and this calendar now gives us the framework on which to build our planning. We are taking a number of steps to enhance grids for the season ahead and look forward to finalising the shape of the championship in coming weeks.” 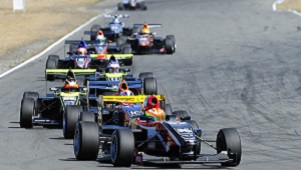