Arjun Maini bounced back from disappointment to make sure of a race win in the Denny Hulme Memorial Trophy at Taupo.

The teen driver was relegated from an emphatic race win on Saturday when officials judged he had jumped the start, but the 20-lap Denny Hulme feature race was his chance to shine.

He has proven himself the master of the safety car restart and put his skills to good use after French driver Brandon Maisano rolled his car at the first  corner.

Maisano, who won the first race on Sunday, had made a lightning-fast start from a mid-field grid position for the feature race and was down the outside of the massed field heading into the first turn. He locked wheels with another car, the combined energy flicking his car more than two metres in the air in a multiple barrel roll before it landed upside down, bringing out the safety car and rescue crews.

Maini made no mistake on the restart, judging his sprint perfectly as the lights went green to take an instant .5 second lead that he extended out to more than one second over ensuing laps.

“I was having trouble with grip as our tyres were not fresh, and every time I looked in my mirrors I saw a different car on my tail! I could see them all back there so it was difficult to control the pace because they would run very close to me under braking,” he said afterward.

Maini ran out the winner in the feature race ahead of Artem Markelov – recovering in good form from his own massive crash and rollover in Saturday’s second race – and Irish driver Charlie Eastwood.

Races one and two

The Denny Hulme weekend was the only one in the series that included four races, with the two Saturday races falling to Sam Macleod (after Maini’s jump start penalty) and Brandon Maisano.

Arjun Maini took victory in race one on Saturday in hot conditions, a clean and dominant drive in a race peppered with crashes and safety car periods, but was assessed a ten second penalty after officials judged him to have jumped the race start. The decision handed the win to Sam Macleod, who said he had enjoyed battling with Maini for the lead and would have preferred to take the win on-track. Young American racer Santino Ferrucci was second, banking valuable points for the championship, and current championship leader Lance Stroll (16, Canada) was third.

Australian driver Thomas Randle set fastest time and a new TRS lap record with a 1:24.382 of the 3.32 km international circuit on lap seven.

The second race fell to fast Frenchman Brandon Maisano, who dominated the racing after a massive crash took out GP2 driver Artem Markelov and  New Zealander James Munro. The two drivers came together as Markelov overtook Munro on the start of the long back straight, locking wheels and sending Markelov’s car into a spectacular barrel roll. Though the Russian’s FT50 race car lost front and rear wings and its suspension, the core safety structure protected him from the worst of the crash effects and he was able to get out of the car unaided.

At the chequered flag Maisano was followed home by American Santino Ferrucci and Randle.

Team-mates Lance Stroll and Brandon Maisano were now 1-2 in the championship.

Race three on Sunday morning was all about Maisano and Stroll, the pair having dominated off the front row of the grid and making sure of a team 1-2 at the chequered flag.

Alfonso Celis Jr went off at the tricky turn five, bellying his car in the gravel trap. The ensuing safety car period enabled the field to close right up on the leading pair and  wiped out Maisano’s .8 second advantage over Stroll. Sam MacLeod was third, close behind Stroll as the race went back to ‘green’. In the closing laps Markelov and Sergio Sette Camara tangled at the turn 14-15 chicane, sliding onto the grass. Camara was able to regain the track and finish but Markelov had a traffic cone lodged under his car and ended up bellied as he tried to rejoin.

Behind Maisano and Stroll and third place on the podium went to Sam MacLeod, and Arjun Maini had carved his way through the field from a start position of sixth to be fourth at the finish.

The Denny Hulme Memorial race over 20 laps was the feature race of the weekend, and with Arjun Maini on pole and young British driver Callum Ilott beside him the race to the first corner was intense.

Ilott won the sprint, slotting into the corner with Maini right behind, but in the pack that followed them Brandon Maisano made wheel-to-wheel contact with another car in a three-car cornering battle and rolled, bringing out the safety car. 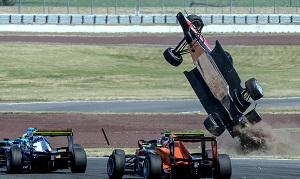 Maini retook P1 and at the restart made no mistake, taking a lead he would hold against all comers for the entire 20 laps.

“Grip got bad, I was getting good drive out of the corners but braking was very difficult and the course was very slippery too.”

Pursued for much of the race by Charlie eastwood, Maini got a brief respite when Artem Markelov began in turn to chase the Irish driver. Markelov had started from P6 and eventually slipped past Eastwood into second place to attack Maini. He narrowed the gap to .2 seconds but was unable to mount an effective attempt at overtaking before race end.

Toyota Racing Series is New Zealand’s premier motor racing championship. It is be contested over five consecutive race weekends in January and February 2015. Taupo (February 7 and 8) is the penultimate round, a last chance for drivers to grab points before the New Zealand Grand prix. It is the first time TRS has raced on the fast and demanding Taupo circuit since 2013 and the feature race will be for the Denny Hulme Memorial Trophy.

Many drivers who have risen through TRS have gone on to impressive racing careers. The championship has been an important step in the careers of the past three GP3 Series winners: Mitch Evans (2012, now racing in GP2 with the support of Mark Webber); Daniil Kvyat (2013), who made his Formula One debut this year with Scuderia Toro Rosso and steps up to the Red Bull Racing drive vacated by Sebastian Vettel; and Alex Lynn (2014), who was second in TRS in 2013, won the 2013 Macau Formula Three Grand Prix and has recently also tested in Formula One.